Albuquerque is a really nice city. The people are very nice too, although they seemed to me to drive pretty aggressively. At over 5,000 feet it gets really cold in the winter. All of the happening bars and clubs are on Central Ave. They close off the street late at night so all the party people can stumble around without being hit. Taco trucks park on the street and it's all pretty cool. I hit all the record shops I could find in town and have listed them in order of importance below. 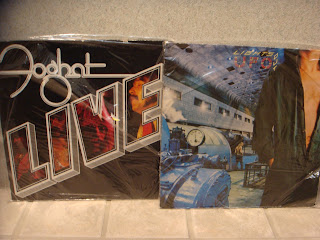 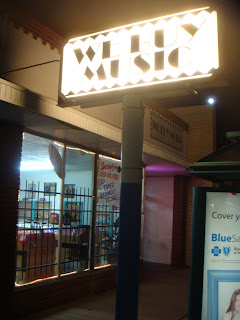 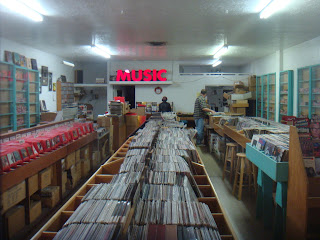 We Buy Music –
Stocked with lots of LP’s. The store is kind of disorganized. I mean the owner could do a much better job with what he has but I get the feeling he has a mild case of hoarditis. A nice helpful guy though. I was in a bit of a hurry so I only spent about 30 minutes here flipping through his LP’s. I came away with a cool Queen German bootleg that I have never seen before. All styles represented and a pretty good jazz section. Prices just a bit on the high end. If you have time to dig this place is definitely worth checking out. He told me he has another room he referred to as the “bone yard” where there is thousands of $2 LP’s he said were in really good condition. I was in a hurry so I passed on the bone yard. Recommended. 5203 Lomas Blvd NE. 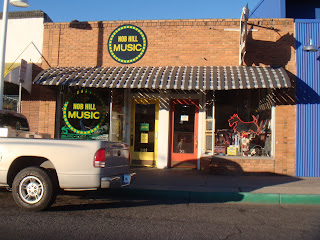 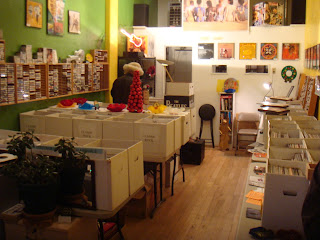 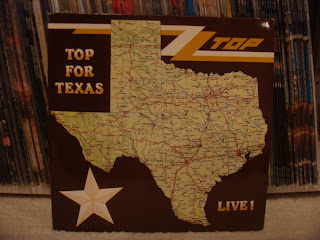 Nob Hill Music –
A super small shop run by two nice guys. They have a small selection of all styles. I wasn’t expecting much but did pick up a ZZ Top double LP boot. They were really cool about me taking a picture of the inside of their shop unlike some of the D-bags I encounter. They asked what I was looking for and took my number in case they get any of that stuff in. Awesome. The people in Albuquerque are really nice. Recommended. 3419 Central NE Albuquerque, NM. 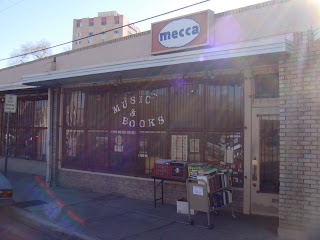 Mecca Music and Books -
When I first walked into this place, based on the overall fullness of the shop and the clutter all about I thought there might be some good stuff buried in there. Not the case. The prices are good, in the $3 to $8 range but then again those are common LP’s. The place is worth a look if your in town, be prepared to dig a little. The owner was friendly, not to me but to the other customers he had in the shop. Me? He didn't acknowledge me, that’s OK because I know what I want and I don’t need help. I was reading online about how other people go into this shop and are bummed out that the owner isn't friendly enough, or kissing their ass good enough, don’t take it personal, it's just the way he is, no big deal.
The shop also has a bunch of books and other things like used turntables and stuff. The area behind the counter made a big impression with me, the guy has shit piled up all over the place and man, I just had to get a photo of that and I did totally sneak one. There better not be an earthquake in Albuquerque during business hours cause this guy will be buried alive. 1404 Central Ave SW. 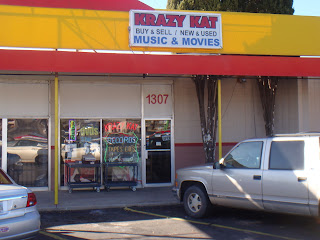 Krazy Kat Records, Tapes and CD’s –
So I read that this shop got busted by the Feds in 2008 for selling burned CD copies. WTF? This kat must be krazy, how in the hell do you get caught up in that sort of business? What a total dick move. Otherwise known as selling counterfeits. Somebody must have dropped a dime on his ass and the F.B.I. and RIAA showed up to party.
Anyway, there were customers in this small shop looking through the CD’s. I didn’t stick around long enough to see if they were official or not since the vinyl selection was pretty thin and the few LP’s that may have been of interest were way overpriced. Not recommended. 1307 Eubanks. 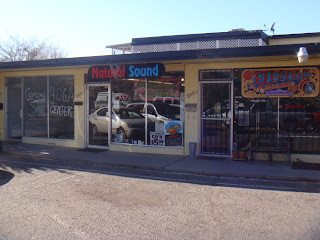 Natural Sound – I spent 5 minutes in here, tops and found nothing except high prices and I looked through pretty much everything. Small shop not worth looking into. 205 Wellesley.

Record Roundup – There  is no vinyl in this shop, don’t waste your time here. 2529 San Mateo Blvd. NE.

Here is one place I will recommend. The Frontier Restaurant. Open everyday 5am to 1 am. Good food and an interesting atmosphere. Lots of artwork on the walls. The tortillas are awesome. They have Coke machines with over 100 different flavors. 2400 Central Ave SE. 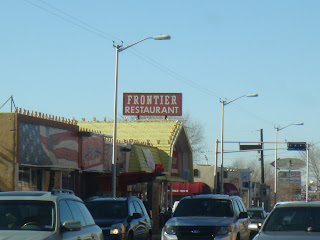 Posted by The Vinyl Record Collector at 2:09 PM