Here is how I would summarize Massachusetts record shopping: Go to Mystery Train in Gloucester and Record Exchange in Salem and skip Boston altogether.
Gloucester - Mystery Train Records
I was driving south along the coast and just happened to arrive here at 15 mins to seven. The Mystery Train closes at 7 and the clerk told me so. "We close in 10 minutes". OK dude. I blasted through the rock LP's in 10 minutes. I walked out with 3 Rush boots, a Deep Purple promo interview disc and a B-52's promo. This is a really good store, it looks like they keep it well stocked with good stuff in all genres. 21 Main Street. Highly Recommended. 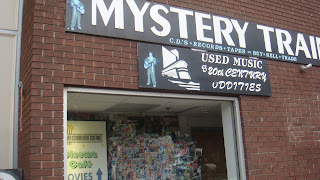 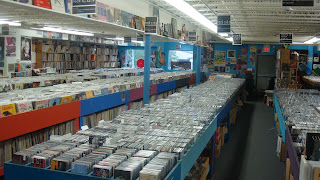 Salem - The Record Exchange
What an awesome shop! I was pleasantly surprised by this place. The clerk was friendly and helpful. Found a Pretenders boot I had never seen before. A Sparks UK import 12", a Cars UK import 12", an REO "Riding the Storm Out" advance promo and some other cool shit. The clerk told me people from Boston drive up to Salem to buy records, now i know why, there isn't much in Boston, The Record Exchange has all the good stuff in all genres, reasonable prices and you don't have to pay $12 an hour to pawk your caw, like you do in Boston. 256 Washington Street.  Highly Recommended. 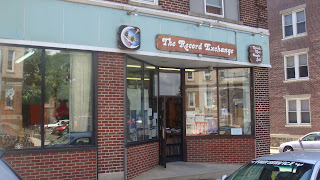 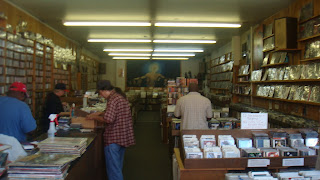 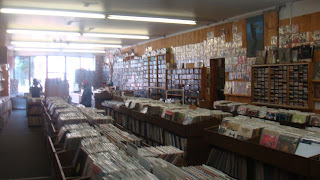 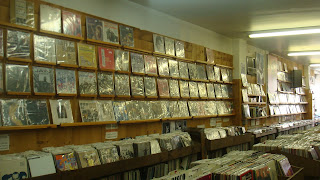 
In Your Ear - Two locations – one on Commonwealth by Boston University and one on Mount Auburn in Cambridge. Both are pretty much full of LP’s and they aren’t very collectable from what I could gather, although you may do better then me. All I found was common picked over stuff. I did buy an Elton John “Honky Cat” LP an import from somewhere, not sure where yet though. It was two bucks. That was all I could find between both of these shops. Probably worth a look if your in the area.
Weirdo Records – Cambridge
If you want 2nd hand vinyl don’t bother with this one. 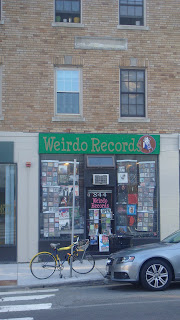 Cheepo – Cambridge
Cheepo didn’t have anything I wanted, and like the rest of Boston, they aren’t that cheep either. 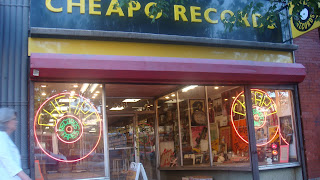 Planet Records – Cambridge
They had what seemed to be a pretty good jazz section but the rock was common, picked over and high priced. 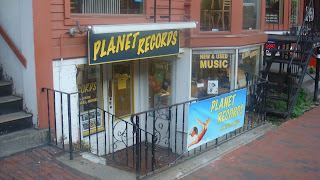 Nuggets – Lot’s of LP’s in here, some are cool, like the several boots from Queen, Bowie and others I saw, but at $35.99 each I guess that’s why they are still there. Other than that, lots of commons in this place, just around the corner from Fenway Park. Can’t recommend this one though. 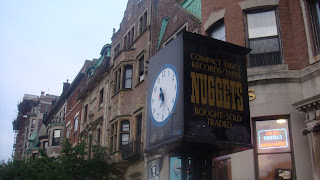 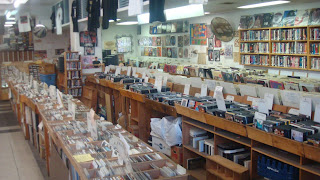 Worcester
Jelly's New and Used CD’s - Common LP’s, don’t bother. Go next door to That’s Entertainment which is a comic book store complete with side room where the uber nurds hang out and play Dugeons and dragons or some kind of geek shit there. But they have some LP’s including some boots, overpriced but at least they have them. If your in the area stop in. 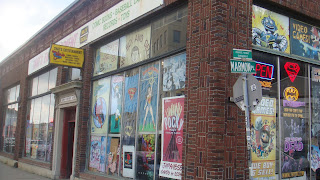 Natick – Déjà Vu Records
When I walked in the door I tripped over a box. Bad sign. What a disorganized joint. The owner lady is from somewhere I just don’t know where, safe to say not the USA. She is very friendly and helpful, but god damn her shop is a mess, after flipping through all her common records, I entertained myself by looking at the colossal cluster fuck she has going on there. I was about out the door when I saw a few Beatles LP’s. I generally don’t do Beatles but she had a couple bootlegs and a few commercial releases with the shrink on it and a hole punched promo White Album that was in great shape, so I asked her the price since nothing is priced. $5 each for the bootlegs and a few bucks each for the others. OK, done deal. She does have lots of jazz, classical and soundtracks so if you wanna dig, have fun, but I won’t be going back here. 154 E. Central Ave.

Posted by The Vinyl Record Collector at 12:31 PM 8 comments:

Wallingford Center, CT
Redscroll Records - This is an awesome shop. Good used (and new) selection. The second hand vinyl is in the very back room of the shop. About half the LP’s are in bins so I was able to flip through them, the other half are on shelves so it took a bit more time. They have some imports, some promos a couple of boots and all of their records are at good prices. I picked up a UK pressing UFO Live LP, a Foreigner UK promo, a vintage Yardbirds LP, an Iggy Pop bootleg, a Ted Nugent Canadian pressing and a bunch of other cool shit. If your down to get a Red Scroll Records tattoo scratched into your skin, they will give you up to a 30% lifetime discount depending upon the size and placement of the tattoo!  And they didn't give a shit that I took photos of the inside of their shop. Redscroll Records 24 North Colony Road, Wallingford Center, CT. Highly recommended. 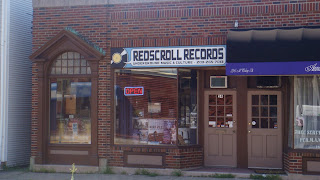 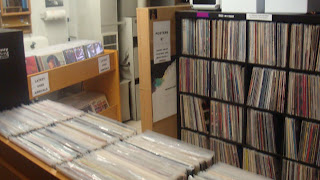 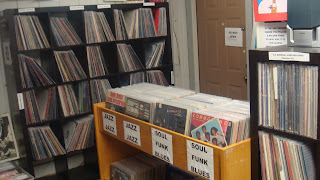 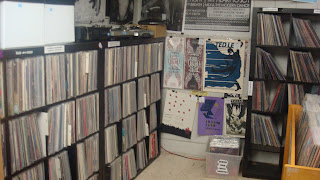 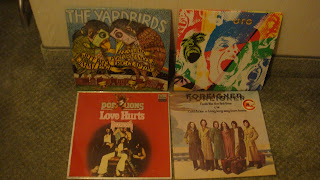 Waterbury, CT
Brass City Records and Tools - Another good shop. When you get to the door, you have to knock, I don’t know why, but there is a sign on the door that says to do that and then the dude hollers at you that it’s OK to come up the stairs. OK. Whatever. When you get to the top of the stairs you will see all the dusty chaos this guy has going on here. I went right for the “New Arrivals” bin and pulled out two near mint Black Sabbath LP’s with the original green Warner bros. labels for $7 each. Oh hell yea, and we are off to a good start here at Brass City Records and Tools. As I’m standing there I see a Motley Crue “Too Fast For Love” LP on the wall, it’s a Mexican pressing and now it’s going to live in my house. Went to the back room where he has his antique tools on display and found a $7 German Sabbath Live at last LP. Poked around a bit in the hallway and found a Joy Division “Komakino” flexi 7 inch and a German Pink Floyd 7". The owner who was busy packaging up several priority mail boxes which I assumed were eBay items tells me to check the other bins over behind his counter where the 60’s artists are. I have to say, his organization is pretty screwy. There is a Prog bin, a consignment bin, an import bin, he's got Pink Floyd, Led Zeppelin and Jeff Beck in the 60's area which i suppose is technically correct but not usually where one finds those artists. He's got all sorts of cool collectables all over the walls, no real theme to any of it, you just have to spend some time in this place, it's pretty much a mess but this kind of mess I can deal with because he's got the goods. If you really want to get this guy talking, ask him about his Kaleidoscopes. Yes, you read that correctly. Brass City Records, Tools and Kaleidoscopes. Interesting.  Dirty, dusty and pretty much disorganized but a total gem of a shop with reasonable prices; be prepared to dig around for a while. 489 Meadow Street, Waterbury. Highly Recommended. 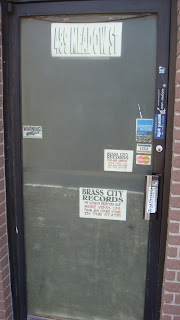 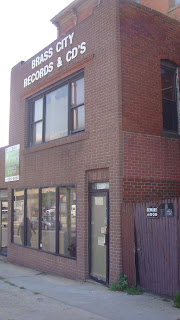 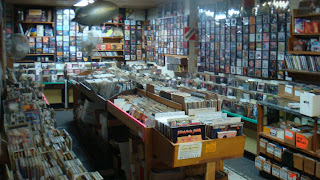 Hamden, CT
Replay Records
Sept 1, 2011 I'm back in CT, so I pull up to this little shop at 11:30am, on the door it says they open at 11am, the Chinese fast food joint next door told me that he rolls in more like noon every day. OK, so we walk a couple doors down to the Whitney donut and sandwich place. Good move, the place is awesome with great food and a bar you can sit at and eat. Struck up a conversation with an elderly couple who were telling us all about the hurricane Irene. Anyway, after lunch, walked back into the record shop, and the dude is there, GREAT! He's got some cool stuff, prices a bit on the high side but I did find a cool French pressing Dead Kennedy's 12" "Holiday in Cambodia" for $7. Recommended, only about 6 or 7 miles from Redscroll Records. 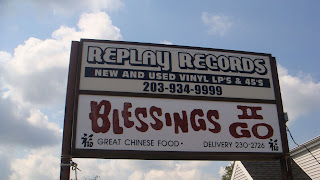 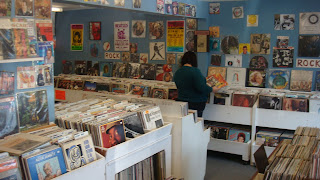 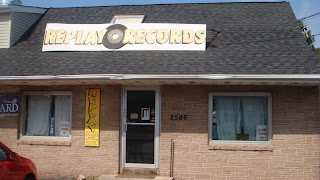 New London, CT
Telegraph
A nice shop in cool ass New London. I personally didn't find anything I wanted here. They had what seemed like lots of common LP's. Worth a look if your in town or passing through. 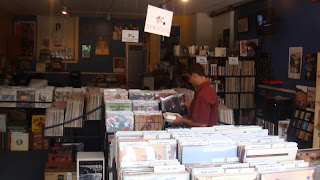 Posted by The Vinyl Record Collector at 5:40 PM 7 comments:

Email ThisBlogThis!Share to TwitterShare to FacebookShare to Pinterest
Labels: R

Portland, ME
Sounds Absurd - Small shop but he does have some cool stuff in here. For $2 each I picked up an Ozzy 12” promo, a Police 12” promo, a B-52’s promo and not for $2 a Clash UK pressing WITH the poster and stickers. He accepts cash only. 55 Oak st. Highly Recommended. 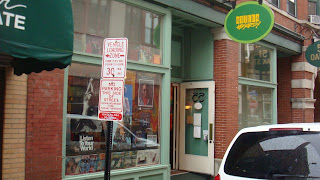 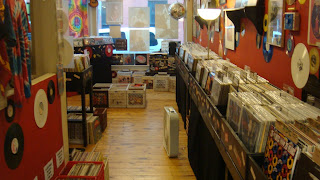 Moody Lords – Directly upstairs from Strange Maine. I went upstairs and started flipping through LP’s. The owner or guy working there says to me “You aren’t from here are you”. I say “no, how did you know”? he replies, “nobody has fingers like that around here”. I guess I was flipping through his LP’s pretty rapidly. Funny. I bought a 10cc bootleg because it was only 5 bucks. 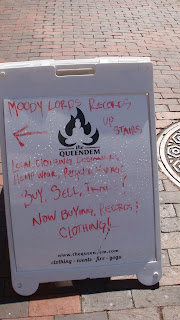 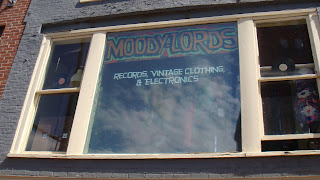 Strange Maine - Lots of beat up common records with high prices, don’t bother with this place.
I hear Bull Moose and Enterprise Records are good in Portland, ME. I didn’t have time for Bull Moose and Enterprise is closed M-T-W which is when I was when I happened to be there.
Saco, ME
Bill O'Neil's House of Rock n Roll – Conveniently located right on the main highway just south of Portland... and this is a house but was pretty much a waste of my time to stop here. Bill's House of Rock n Roll is totally disorganized with shit all over the place, Bill is standing around doing a whole lot of nothing when he should be organizing his house of dirty, dusty and for the most part, common records. I flipped through all I could stand and found only one LP, a Bad Co. German pressing for $7. BFD. Bill says he has thousands of LP's in other off limits areas of the house, the shop itself is just the very front room of the house. Newsflash Bill, get your store organized so you can get all those alleged off limits back room records out onto the sales floor, you are not going to sell them in the back room and even if you don't want to do that, straighten the place up, show some pride in your business it will make for a better shopping experience for your customers. I won’t be going back here ever again. Don’t believe the hype. 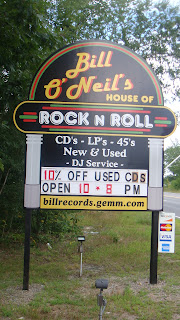 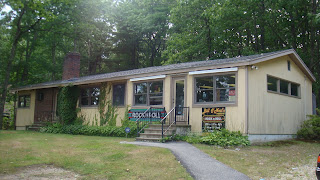 Posted by The Vinyl Record Collector at 4:37 PM No comments: