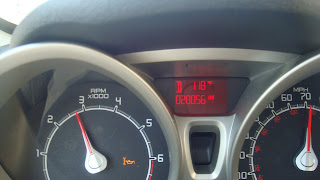 118 degrees. But it's a dry heat! Have to be careful to not leave your records in your car :-) 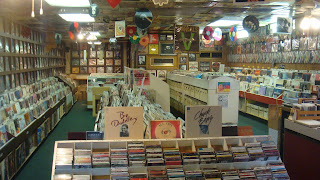 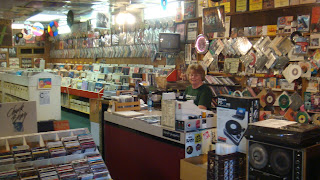 Trax in Wax Records - 4741 N. Central Ave. Apparently this shop was owned by a guy and his wife and the guy recently passed away so his wife who is a very nice lady runs the shop now. I bought a bunch of stuff here. Led Zep TSRTS LP Canadian pressing, Rush live Canadian pressing, Police 7" UK pressing. In the bootleg dept, I picked up a Van Halen a Who and a Clash. So I get the counter and the nice lady says "Oh I have a couple more Clash bootleg records right there". I'm like "yea, I saw those, a bit too expensive for me today". She says, "we'll how much do you want to pay"?  Wow. Now were talking. I tell her what I'm willing to pay,  Hell yea, I took them. what a nice friendly lady and she was totally cool about me taking pictures of the inside of her shop. According to Hot Wacks, the Clash boot on the left is a rare French bootleg. Next time I'm in Phoenix, this place will be number one on my list of shops to visit. Highly Recommended. 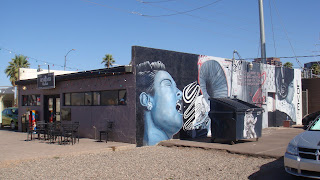 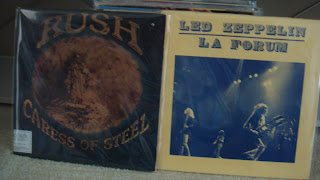 Revolver Records. North 2nd street, Phoenix, AZ
I only had about an hour in PHX so I picked this shop to spend my hour. I knew I had the right place when I walk in the door and they are playing Robin Trower “Bridge of Sighs” on vinyl no less. Nice. I really like the vibe they have going here, patio furniture in front of the shop and free WI-FI. The used vinyl selection was modest but there is real quality here. Prices are very reasonable. Most used LP's average less than $10. I bought a Rod Stewart boot for $9.99, a Ted Nugent promo for $2.99 and a Stones German press of “Goats Head Soup” for $12.99. They also sell used CD's and other stuff. I will definitely be back to this place. Highly recommended.

On my second trip to this shop I picked up a Rush "Caress of Steel" that is a USA made hole punched promo, but has a sticker on the lower spine for Anthem Records Canada, not sure what to make of it, except that perhaps it was made in the USA and then some were shipped up to Canada, and stickered for sale up there. Also got a Led Zep boot, looks to be a fairly recent pressing though. Revolver is good, although I didn't find as many gems this time around. Still Highly Recommended. 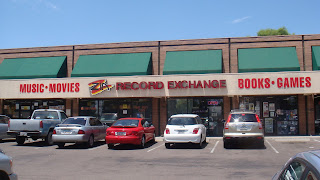 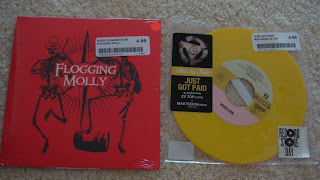 Zia - Thunderbird location. A typical Zia store with all the good stuff they sell. On this day I did find a ZZ Top/Mastodon split 7 from Record Store Day 2011 for $6.99 also a Flogging Molly live 7". In the used dept I found a German pressing of a Pretenders II LP for $2.99. Seems all the PHX Zia stores are rather weak in the used LP's dept but still worth a look. 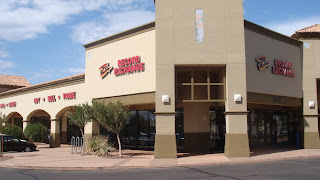 Zia - Chandler location. Didn't find a damn thing i wanted to buy on the day i was there. 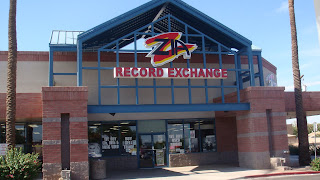 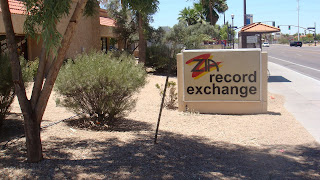 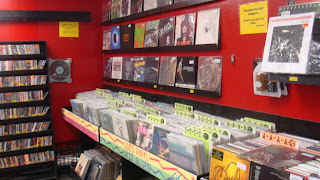 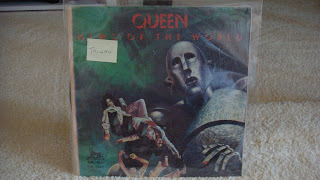 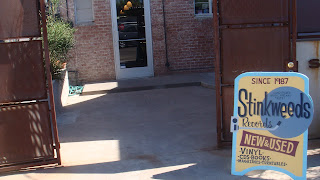 Stinkweeds- Good shop.The second hand vinyl is shrink wrapped so it looks like it's new, check condition at counter.