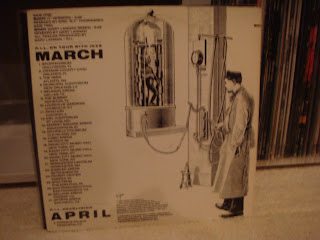 2010, October. Milan, Italy. Shop: Metropolis Dischi. I had been to this same shop before, way back in 1995. It was a good shop then and it's still a good shop. They keep all of their 2nd hand vinyl downstairs. A good selection of just about every rock category. Prices are on the steep end as is the case with most of the European record shops. The staff is helpful. They do take an afternoon siesta of some sort, I showed up at 2 pm and had to wait until almost 4 before they opened the doors. I was waiting for them to show up, killing time next door at a Chinese coffee shop not knowing the owner of the record shop was sitting right there in the same coffee shop with his homie drinking those microscopic cups of espresso. whatever. When he finally opened the doors, (and allowed me downstairs) he had some nice stuff so I dropped some Euros on him. They also took the time to get on the horn and find me a shop in Genova since I would be there the next day. That's them in he back of the shop on the left side of photo and on the far back wall, that's where the really expensive stuff lives.
Posted by The Vinyl Record Collector at 4:32 PM